In the current years, entire world is in the surge of innovation. Everyday new ideas lead to the development and reformation of any material which can be natural or synthetic. Biotechnology is one of those areas where wave of new ideas brought several products of agricultural, environmental, medical and pharmaceutical applications.

The term "Biotechnology" was first used by "Karl Ereky" in 1919, meaning the production of products from raw materials with the aid of living organisms.1 The era of biotechnology-enhanced agriculture began in the 1990s with government approval for commercial deployment of biotech soybeans, corn, cotton, canola, and papaya. Because of their tremendous production advantages, biotech crops have become the most rapidly adopted technology in the history of agriculture.

The word “biotechnology” is extensively applied and covers a number of different technologies. A commonly used definition of modern biotechnology is provided by the consulting company Ernst and Youngin 2000. Ernst and Young were the first to regularly publish detailed reports on the biotechnology industry, starting in 1986 for the sector in the US and, later, also covering Europe, Asia, and some specific countries (e.g., UK, Germany).

Therefore, Ernst and Young’s. definition of biotechnology is widely accepted by both practitioners and academics: “The term “modern biotechnology” refers to all the innovative methods, processes, or products, which include the use of living organisms or their cellular compartments and draw on the results and knowledge generated from research in the fields of biochemistry, molecular biology, immunology, virology, microbiology, cell biology, or environmental and engineering sciences.”.2

Thus, before 17th century biotechnology was all about preparation of cheese, fermentation and crossbreeding of animals; whereas after 17th century till 19th century the biotechnological concepts included plant and animal tissue culturing, genetic modifications, development of vaccines and antibiotics; and after the 19th century the concept of molecular biology, coding and de-coding the genetic characters, concept of cytoplasmic hybridization and first ever monoclonal antibodies, has revolutionized the diagnostics. The development in biotechnology sector is very fast. Entrepreneurship and innovation are the major factors in all stages in the development of any sector.3 In the late 20th and early 21st centuries, biotechnology has expanded to include new and diverse sciences, such as genomics, recombinant gene techniques, applied immunology, and development of pharmaceutical therapies and diagnostic tests.

Today’s entrepreneur is not only the innovator but also the developer of ideas and at the same time grabs the opportunities and encases it into marketable entities. The entrepreneur have to be a team leader and also have to look after the financial and material resources required for all innovative ideas to be made available for the consumers. 4 Few of such entrepreneurs are bringing up market of biotechnology and biotechnological products by setting up the trends in Bioentrepreneurship.

The mid–1970s emergence of technologies based on recombinant DNA and monoclonal antibody technologies, which evolved from the revolutionary work of scientific partnerships such as that of Cohen and Boyer, and Kohler and Milstein, established the foundations for the biotechnology industry. At present India is among the world's top biotech powers. However the concept of “bioentrepreneurship” is fairly new in India. Scientist in our country still follows the traditionalresearch culture, they have not completely moved out from their safe zone yet.

Although the need for academic excellence is understandable, but right now the need of the hour is to provide safe, affordable healthcare solutions that can be used to save millions of lives. This is the major work on the shoulders of the bioentrepreneurs today. Every bioentrepreneur should try to find a market for his research; while he is working on a basic research he must develop products of commercial value. Every bioentrepreneurs must thoroughly understand the grassroots of biotechnology sector such as research, collaboration, infrastructure, and technology and commercialization capital and come up with an alternative business model to achieve success. Some prominent bioentrepreneurship based companies are;

Biotechnology is one of the strongest growing industries of the twenty first century. Yet, the sector is still young and many biotechnology firms are at an early stage of their life cycle. Thus, biotechnology and entrepreneurship are intrinsically linked together, and over the last years a substantial number of articles in the entrepreneurship literature have studied biotechnology at the regional, firm, and individual level of analysis. 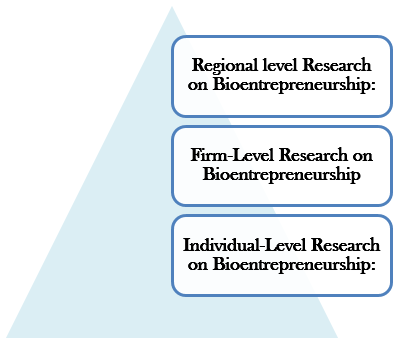 While research at the regional level is substantial, certainly most of the research on biotechnology entrepreneurship has been conducted at the firm level. At this level, research has investigated strategies and business models of biotechnology firms, strategic alliances these firms form, and mergers and acquisitions between firms. The pattern of inter-firm collaboration in biotechnology is probably more extensive than in any other industry. 9, 10, 11, 12 In addition to that, the biotechnology industry is characterized by a social network structure requiring a shift from coordinating the internal activities of the firm through a traditional command and control structure to providing organizational support for internal and external exchanges. In what follows we review research on (i) strategies and business models, (ii) strategic alliances, and (iii) mergers and acquisitions of biotechnology firms.

The study shows that more new biotechnology firms are founded in regions where more researchers/ scientists work at universities and research institutes. From the perspective of the knowledge seeker, a survey of 507 biomedical researchers revealed that scientific competition, costs of providing the knowledge, and knowledge suppliers’ past engagement in commercial activities counteract information sharing.15 Further, although the overall connectedness between academic scientists and firm inventors within the scientific community is substantial, the transfer of knowledge appears to be dependent on the existence of “gatekeepers” — individuals who occupy prominent positions in scientific and technological networks.16

Although founding and managing a biotechnology firm is among the most complex entrepreneurial endeavors due to the competitiveness and dynamism of the environment and the technological complexity, there is little research how strategic decisions are made within biotechnology firms. Taken together, research at the individual and team level has demonstrated that highly competent (star) scientists are often the trigger of commercializing a new biotechnological technique by founding a new venture. Further, it appears that the CEO is a central person for the success of biotechnology firms, and that the composition and competencies of the firm’s top management team play an important role in explaining biotechnology ventures’ development trajectories and, finally, performance. Finally, one issue that has basically remained untouched in the field of biotechnology entrepreneurship is studies covering multiple levels of analysis and investigating cross-level effects. Indeed, scholars have claimed that there is a general lack of cross-level studies both in the field of entrepreneurship 18 and organization science. 19 Cross-level studies could cover interactions between regional and firm levels, firm and individual levels, and regional and individual levels.

J Alper The rise of the European Bio entrepreneur”Nat Biotechnol20022035

S Breschi C Catalini Tracing the links between science and technology: An exploratory analysis of scientists’ and inventors’ networksRes Policy2010391142610.1016/j.respol.2009.11.004