Shah, Patel, and Patel: Perception of patients with chronic respiratory disorders regarding doctor-patient communication at a tertiary care hospital

Introduction: It is believed that doctor-patient relationship is an important determinant in patient’s adherence to the treatment. The doctor-patient relationship can be seen as the perception of the patient concerning shown by the doctor, and the attitude and behaviour of the doctor towards the patient. For management of chronic illness where patient adherence to treatment is challenging, good doctor patient communication is very essential. This study was planned to assess the doctor patient communication status, effectiveness and patient satisfaction resulting after consultation with the doctor in a tertiary care setting.

Objectives: This study aims to assess the doctor-patient communication status, patient satisfaction level and identify the factors affecting the communication with the patients.

Materials and Methods: This was a cross-sectional questionnaire based analytical study. The questionnaire mainly included various questions to assess the patient satisfaction in terms of time spent by doctor during visit, examination performed, discussion on treatment plan, medication dosage and side effects explained, response to patient questions and concern and overall satisfaction of the site visit. The study population included patients of Chronic Obstructive Pulmonary Diseases (COPD) and bronchial asthma attending the outpatient departments of Medicine and Respiratory Medicine of a tertiary care hospital.

Results: Total 70 patients had filled the questionnaire and all of them were satisfied with their visit with attending physician in OPD. Age, education level and income class affect the satisfaction score of participants.

Conclusion: Overall the study showed a good level of satisfaction of patients with services obtained from this tertiary care centre. Physician can improve the doctor-patient communication by empathising with the patients and rendering them sufficient time to explain the treatment regimens.

Patient satisfaction is an important parameter to determine the quality of care and is defined as “evaluation based on the fulfilment of expectations”.1 It is a multidimensional healthcare issue affected by many factors, including the organisational aspects of care, the physical environment, and the characteristics of the patient and doctor communication.2, 3, 4 Doctor-patient communication is very effective tool to build good therapeutic doctor-patient relationship, which is the heart and art of medicine. Main goal of doctor patient communication is to maintain good interpersonal relationship, exchange of information and involving patient in decision making. Patients are more satisfied and inverted towards the treatment regimens if their doctor shows respect and care towards them. 5

Effective communication and interpersonal skills of doctor helps to gather the information to make accurate diagnosis, counselling the patient, give therapeutic instructions, and establish caring relationships with patients. This helps to achieve better symptom relief, clinical outcomes, patient behaviour, and possibly medical adherence to the treatment. 6 One of the primary reasons for poor adherence is that the patients lack the satisfactory understanding about their chronic conditions. 7

Chronic obstructive pulmonary disease (COPD) is a leading cause of morbidity and mortality worldwide. It is considered as systemic inflammatory syndrome and is associated with important comorbidities. Bronchial asthma is a chronic inflammatory disease that is very common among youth worldwide. The burden of these illnesses is very high not only considering financial costs but also on emotional and social functioning. 8, 9

In chronic diseases like chronic respiratory disorders, effective doctor patient relationship and thus effective communication is an integral part for a better treatment outcome. This relationship is determined by both the parties – doctors and patients. From a doctor’s perspective, patients’ characteristics like gender, age, education and income play an important role. Characteristics of the doctors which might be related to patient satisfaction include age, gender and attitude.10 Although the above-mentioned factors are related to patient satisfaction, many of them cannot be modified. An exception is the attitude of the doctor as one of the determinants of the doctor-patient relationship. This is important and can be modified. 2, 3, 4

To further clarify the multi-dimensional concept of patient satisfaction, the present study was planned to investigate the doctor-patient communication skill as perceived by the patient, and to identify factors affecting communication in patients suffering from chronic respiratory disorders attending the Out Patient Department (OPD) of a tertiary care hospital.

Adult patients suffering from mild to moderate symptoms of Chronic Obstructive Pulmonary Disease (COPD) and asthma attending the OPD of medicine and respiratory medicine departments were approached to participate in the study on voluntary basis. Written informed consent from all the participants was obtained.

This was a cross-sectional questionnaire based study. A questionnaire was specifically prepared to meet the objective of the study. A 19 questions questionnaire was used for this research and was pre-validated (Table 2). Patients were asked to give reply on five point Likert scale (1-strongly agree, 2- agree, 3- neither agree nor disagree, 4-disagree, 5-strongly disagree). The questionnaire was translated into the vernacular languages.

Statistically significance was set at P<0.05.

A total of 70 patients visiting OPD of medicine and respiratory medicine departments were included in the study. A majority of the patients participated in the study belonged to 45-75 years age groups. Out of the total, 44.3 % of the study population comprised of females. In our study, approximately 97 % patient was literate; also a percentage of patients having a qualification of high school and above were 69%. Approximately, 64.29% of participants belong to monthly income class I based on criteria defined in Prasad’s socioeconomic classification criteria. Out of total, 47.1% of the patient had first visit to OPD for management of COPD and asthma while rest 52.8% of the patient had follow-up visit. Socio-demographic details of the study participants are described in Table 1.

All patients were satisfied with their visit to doctor and feel that doctors showed concern towards them. The Chi square test results were found to be non-significant when comparison of average percentage scores between male and female participants were done (P < 0.05). When comparison of Chi square test results were performed using age group criteria it has been observed that patient in the age group of 25-54 years are more satisfied with doctor visit as compared to patient in the age group of 55-84 years (P < 0.05). Based on Prasad’s socioeconomic classification it has been found that participant in the Class 1 group has significantly better result compared to other groups (P < 0.05). The result of patient satisfaction comparison level between first visit and follow up visit was not significant (P > 0.05) even with follow up visits having a better average. 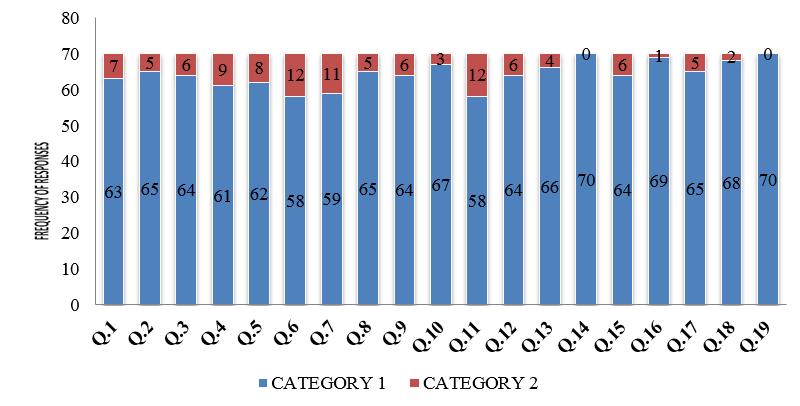 In the present study, a better perceived doctor-patient communication was related to higher patient satisfaction. This relation depended upon the demographic details such as gender, age, education, and income and visit type. All patients were satisfied with their visit to doctor and feel that doctors showed concern towards them. However, for some of the questions for e.g 6, 7 and 11 patient satisfaction level was less as compared to other questions. This shows that patient expect better and clear explanation regarding the conduct of physical examination and lab investigations as well as detailed instruction for medication including possible side effects. This may be due to time constraint observed in a busy schedule and attitude of doctor not explaining the need of investigation and possible side effects. This may be leading to dissatisfaction observed in some patients.

Results of the study also showed that the younger age group had better perception and may show better adherence compared to the older age group. The questionnaire contained different components for the doctor-patient relationship such as the two-way communication, adherence to treatment regimen, their role in deciding their treatment and the knowledge they were provided by the doctors. It is believed that a younger mind would show more interest than the elderly.

Similarly, education plays an equally important role in the relationship. Results of the study showed that the people who have attended high school and more education showed the higher scores in terms of patient satisfaction.

Following these details, comes the monthly income which is also a significant detail for this study. Education and monthly income go hand-in-hand in today’s world. Monthly income was classified on the basis of Prasad’s classification wherein Class 1 depicts the highest group for income. Class 1 showed the best results followed by Class 2 and Class 3. There were 7 patients who did not feel comfortable sharing their income and were not considered while studying this detail. As said, education and income go together and so it is to be believed that patients belonging to Class 1 found themselves understanding the doctor better than other groups. They showed a better understanding towards the questions than the other groups hence scoring higher than other classes.

Gender is not significant for the doctor-patient relationship. But that is a debatable topic. The number of males included in the study was more than the number of females. The average scores of both the genders differed, with the males being more satisfied than the females. But the difference was not statistically significant.

The same applies to the visit type of the patients. Though the chi square test was not significant for the visit type of the patients, the follow-up patients showed higher degree of satisfaction than the first visit patients. This is because the follow-up patients were already diagnosed and were familiar with the doctors and treatment regimens unlike the first visit patients.

Present study was based on limited sample size. Studies based on larger sample size and inclusion of multiple centres and various types of chronic illnesses are required to portray better understanding of factors affecting patient satisfaction level in terms of doctor patient communication. A limitation to this study is that the less difference among the scores makes it difficult to actually sum up the factors that affect the doctor-patient relationship.

The information regarding-patient communication from patient’s point-of-view helps us in understanding the aspects in the components of communication keeping in mind the patient related factors. This can lead to modification in the training of the medical graduates focussing on communication skills.

Although having some limitation, strength of the study lies in the fact that there are very few published studies on factors determining the patient satisfaction level in terms of doctor patient communication for management of chronic illness in India. This study was an attempt to do so.

Overall the study showed a good level of satisfaction in terms of doctor patient communication as perceived by patients suffering from chronic respiratory diseases attending the OPD of this tertiary care hospital. We have studied number of factors affecting the patient satisfaction level. Patient’s age, education and economic class can modify their perception regarding doctor patient communication. There is less satisfaction in relation to explanation regarding physical examination, investigations and prescribed medicines.

In conclusion, we can say that only the pharmacotherapy or clinical setting cannot lead to a better patient adherence and satisfaction but the level of comfort a patient feels with the doctor plays an equally important role. An effective communication is a mix of empathy and structured method.

R Crow H Gage S Hampson J Hart A Kimber L Storey The measurement of satisfaction with healthcare: implications for practice from a systematic review of the literatureHealth Technol Assess2002632124410.3310/hta6320

M Sustersic A Gauchet A Kernou C Gibert A Foote C Vermorel A scale assessing doctor-patient communication in a context of acute conditions based on a systematic reviewPLOS ONE2018132e019230610.1371/journal.pone.0192306

Shahrzad Lari Davood Attaran Mohammad Tohidi Improving communication between the physician and the COPD patient: an evaluation of the utility of the COPD Assessment Test in primary carePatient Related Outcome Measures201451451451179-271X10.2147/prom.s54484Informa UK Limitedhttps://dx.doi.org/10.2147/prom.s54484