Learning is a process by which brain acquires new information about the events occurring in the given surroundings whereas, memory is a facility by which sensations, impressions, and ideas are stored and recalled.1

Acute alcohol intoxication results from excess intake of alcohol in a single episode of drinking. The accumulation of ethanol in the body results in various clinical manifestations with hepatic, cardiac, gastrointestinal, pulmonary, metabolic, behavioural and neurological effects.2 The hippocampus which is closely related to learning and memory function, can especially be affected by ethanol.3, 4

Fruits are useful in treatment of hepatitis, bronchitis, asthma, dyspepsia, piles, diarrhoea, coughs, hoarseness of voice, eye diseases, scorpion-sting and also used as a hair tonic.8 Decoction of the green fruit is used for cough. Pulp of the fruit is useful in dysenteric-diarrhoea, dropsy, piles and leprosy. Half ripe fruit is used as purgative. Kernel of the fruit is narcotic. Seed oil is used in rheumatism. The triterpenoid present in the fruits possess significant antimicrobial activity. Kernel oil has purgative action and its prolonged use is well tolerated in mice. 9

Studies have established various properties of Terminalia bellirica but its effect on alcohol induced learning and memory impairment is not yet studied. Studies show that even acute administration of Terminalia Chebula, enhances learning in mice.10 It belongs to the same genus and is one of the three components of triphala along with Terminalia bellirica. This explains the need for study.

Institutional Animal Ethics Committee permission was obtained before starting the study. (Ref. No. IAEC/02/03/2019/CPSEA). 48 Swiss albino mice of either sex weighing 20-30 grams bred and maintained under standard conditions in the central animal house in AJIMS and RC were used. They were kept at the animal house of the institute, in clean, clear polypropylene cages in groups of six and maintained at standard laboratory temperature and humidity (40-60%) with light/dark cycle of 12:12 hours. Animals were provided with standard diet and water ad libitum. They were allowed to acclimatize to the laboratory conditions for one week.

The experiment was performed as per the Committee for Purpose of Control and Supervision on Experiments on Animals (CPCSEA) guidelines.

About 1000 g of air-dried crude powder of Terminalia bellirica fruit pulp was extracted with water in Soxhlet extractor for 36 hours. It was dried and reduced under controlled pressure and temperature (40-50°C) using a rotator evaporator. The aqueous extract had a yield of brownish mass weighing 145g. The yield obtained was 14.5% w/w with respect to dried powder. 11

It is a tool for incentive based exteroceptive behavioural model. The total time taken by the mice to reach the reward chamber from the start box indicates learning. The animals are acclimated to the maze environment through timed exposure periods. During the testing phase, the mice is placed in the start box and the door is opened to facilitate the entry of the mice into next chamber. The door of the start box is closed immediately after the animal moves into the next chamber to prevent back entry. The time taken by the animal to reach the reward chamber from the start box is recorded. (TRC) 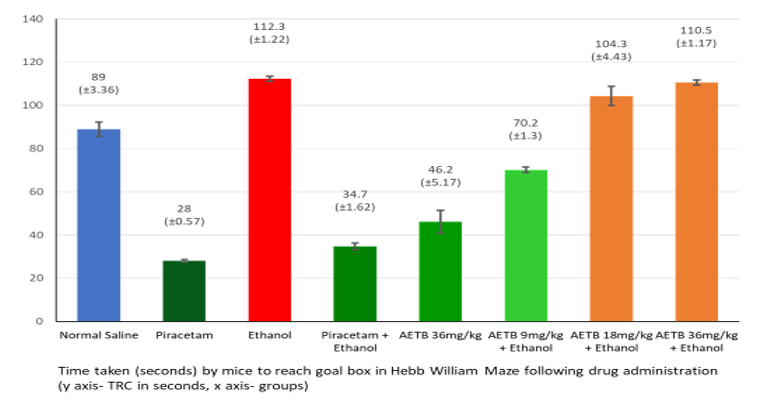 Ethanol can cause direct alteration of various ion channels, receptors and enzymes. These actions contribute to changes in synaptic function and plasticity. Ethanol augments the actions of certain GABA receptors and inhibits the effects of glutamate.Ethanol also promotes neorosteroid synthesis locally in the brain. This increases steroid levels in the hippocampus within few minutes of exposure. These are likely to cause changes in cognition.10

In the present study, Piracetam (200mg/kg) and AETB (36mg/kg) significantly reduced the time taken to reach the reward chamber (p < 0.001), while Ethanol (1.5g/kg) significantly increased the latency when compared to vehicle treated groups (p< 0.001). Animals pre-treated with Piracetam (200mg/kg) and AETB (9mg/kg) significantly reduced the enhanced latency induced by Ethanol when compared to Ethanol alone treated group (p< 0.001). However, the test drug AETB at higher doses (18mg/kg and 36mg/kg) failed to reduce the enhanced latency induced by Ethanol. Decrease and increase in latency period in Hebb- William Maze is indicative of improvement and impairment of learning process respectively. In the present study, the test drug alone at the highest dose tested, produced the effect similar to that of Piracetam and opposite to that of Ethanol. This suggests that the test drug enhances learning process.

The terpenoids (belleric acid and chebulagic acid), saponins (bellericoside and bellericanin) and tannins in general are known to have neuroprotective activity.14 This was a single day study, and the protective action of Terminalia Bellirica was evaluated for acute alcohol induced impairment in learning process. Further chronic studies would be usefull in evaluating the long term effects of Terminalia Bellirica and its effects on chronic alcohol induced memory impairment.

Our study indicates that the test drug enhances the learning process and is comparable to the standard drug Piracetam at higher doses (36mg/kg). Also, it can oppose the alcohol induced learning impairment at lower doses (9mg/kg).