Das: A comparative study to assess the knowledge and attitude regarding Swachh Bharat Mission among community people in selected urban and rural area of Bhopal, (M.P.)

A comparative study to assess the knowledge and attitude regarding Swachh Bharat Mission among community people in selected urban and rural area of Bhopal, (M.P.)

Open defecation and contamination of drinking and bathing water has been an endemic sanitarily problem in India in 2014 India was the country with the highest number of people practicing open defecation around 530 million people. Swachh Bharat mission campaign launched on 2 October 2014. 0n birth anniversary of Mahatma Gandhi aim to eradicated open defecation by 2 October 2019. The 150th anniversary of the birth of Mahatma Gandhi by constructing 90 million toilets in rural India. At projected cost of 1.96 lack crore (us$2). The national campaign spanned 4,041statutory cities and town. Conceived in March 2014 a sanitation conference organized but UNICEF India and the Indian institute of technology. As part the laager totals sanitation campaign which the Indian government launched in 1999.

Swachh Bharat Mission has gained quite a moment the past two year The NDA (National democratic alliance) Government flagship campaign aim sat Covering1.04crore householdproviding25000, Community toilets 260,000public toilet Solid waste management facility in a each town Covering 4,401 town over a period of 5 year. The Mission main objective have been eliminated of Open defecation, Conversion of unsanitary Toilet stop or flush toileted abdication of Manual scavenging municipal solid waste Management and bringing about behavioral Change in People regarding health sanitation Practice in order to encourage cities to be a Part of the clean India initiative the Swachh Survekshan was launched in2015. Under the Survekshan 2016,73 cities were evaluated and measured was ranked on top followed by Chandigarh in a bid to scale up the coverage to The ranking exercise the Swachh Survekshan 2017 has been launched the survey which will Rank 500 cities/Town with a population of 100,000 and above will be conducted. In January 2017 poor sanitation cost India 5.2% of its GDP and Causes disability and deathly disease through the contamination of drinking water sources.1

Need of the study“Cleanliness is next to godliness

A UN report in May had said that currently nearly 60% of India population practice open affrication which pub than at risk of disease like cholera Diarrheal, Typhoid etc. Not only this India also few economic laws because of poor hygiene and sanitation in 2006 said the India losses 6.4% of GPD of ore mentioned reason report says that India is a gold medal list in open and nearly 80% of India population clear their burls in the open this 60% is roughly 58% of the people who practice open defecation all over the world India losses at least 1000 children a day to Diarrheal death and the reason for these death in open defecation. If proper hygiene and sanitation will not become a practice in our country then no one will be able to save the country from the health and hazard and losses that will loom are the India population in near future so let’s makes Swachh Bharat a mars movement and save our country from all dangera standout amongst the most socially defamed illnesses known today. Social disgrace is related for the most part pervasive fantasies like its innate and infectious nature, divine cure alongside the physical distortions caused. The influenced individuals confront physical hindrance endure mental repercussion group's.2, 3, 4

Objective of the study

"A hypothesis is a statement of the research's expectation about relationship between variables under study."

H0:- There is no significant association between knowledge & attitude with selected socio-demographic.

H1:- There is a significant association between knowledge and attitude regarding Swachh Bharat Mission.

H2:- There is a signification between the knowledge and attitude regarding Swachh Bharat Mission. socio-demographic variables.

Swachh Bharat Mission is necessary for the development of Nation.

The study is limited to:

The sample was selected by using convenient sampling. Data collection was done.

The data was collected from 60 people 30 from rural and 30 from urban area] regarding Swachh Bharat Mission.

HOD of community medicine of PCMS was obtained prior to data collection process.

Analysis of the demographic data of the sample

Frequency & percentage distribution of sample according to residential area (100%) urban and (100%) in rural area.

Description of demographic variables of respondents

Section - A frequency and percentage distribution according to age

Distribution of Age according to frequency and percentage 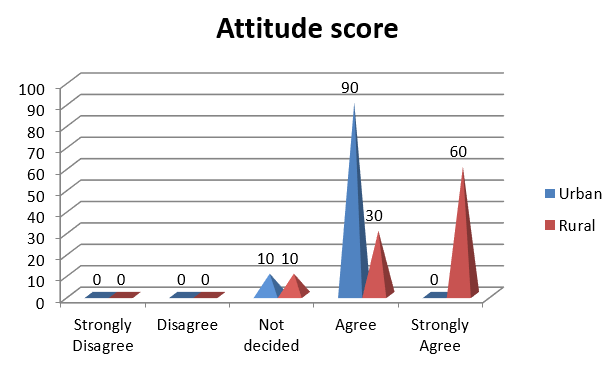 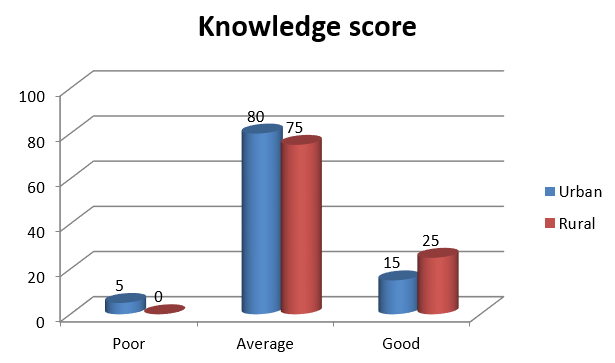 Analysis of data related to knowledge regarding Swachh Bharat Mission among community people.

In order to find out the association between knowledge and attitude of Swachh Bharat Missionwith their socio-demographic variables, chi-square test was used. The findings religion revealed that is significant and age, gender, education status, is non-significant.