Over the last few years, therapeutic efficacy of drugs that have poor bioavailability or narrow absorption window have challenged the pharmaceutical industry. In this framework, many Hydrodynamic Balance System (HBS) also known as Gastro retentive dosage forms (GRDFs) have been used to enhance the therapeutic efficacy of drugs. Such drug have a narrow absorption window, are unstable at higher pH, are soluble in acidic conditions, and are local effect in the gastric-part. The drug development with recent technology of various novel polymeric-based gastroretentive drug delivery technologies that may regulate the bioavailability and extend time of therapeutic efficacy of such drugs. Our focus on the significance of in vitro study and in vivo evaluation parameters of various HBS drugs along with their applications.  This study provides a promising platform for advantages and guide formulation of HBS dosage form were covered in detail.

The oral route is by far the most preferred way of drug administration in the gastrointestinal tract due to ease of drug administration, high patient compliance, easy to handle, cost-effectiveness, for treating local gastrointestinal diseases and transport. While oral conventional drugs encounters difficulties such as limited bioavailability due to the heterogeneity of the gastrointestinal track (GIT), enzymatic activity, pH of the symbiotic flora, gastric retention time (GRT) of the drug. 1 All the pharmaceutical products formulated for systemic delivery via the oral route of administration, irrespective of the mode of delivery (immediate, sustained, or controlled release) and the design of dosage forms (solid, dispersion, or liquid), must be developed within the intrinsic characteristics of GI physiology. Several difficulties are faced in designing controlled release systems for better absorption and enhanced bioavailability. One of such difficulties is the inability to confine the dosage form in the desired area of the GIT. For the successful development of an oral pharmaceutical drug delivery system consists of a basic understanding of the following three aspects.

Thus, the failure of conventional drug delivery systems to retain drugs in the stomach may lead to the development of HBS drug. However, the recent technological offer many benefits such as prolonged gastric residence time (PGRT) of dosage forms in the stomach up to extended time period, enhanced therapeutic efficacy by improving drug absorption, and rightness for targeted delivery in the GIT. Gastro-retentive drug delivery is an approach to prolong gastric residence time, thereby targeting site-specific drug release in the upper GIT for local or systemic effects. 2 Floating systems or Hydro-dynamically controlled systems are low-density systems that have sufficient buoyancy to float over the gastric contents and remain buoyant in the stomach without affecting the gastric emptying rate for a prolonged period of time. While the system is floating on the gastric contents, the drug is released slowly at the desired rate from the system. After release of drug, the residual system is emptied from the stomach. This results in an increased GRT and a better control of the fluctuations in plasma drug concentration.3 However, besides a minimal gastric content needed to allow the proper achievement of the buoyancy retention principle, a minimal level of floating force (F) is also required to keep the dosage form reliably buoyant on the surface of the meal. Many buoyant systems have been developed based on granules, powders, capsules, tablets, laminated films and hollow microspheres.4 Drug delivery systems are used for maximizing therapeutic index of the drug and reduction in side effects due to site-specific drug delivery. Gastro retentive systems can remain in the gastric region for several hours and hence significantly prolong the gastric residence time of drugs. Prolonged gastric retention improves bioavailability, reduces drug waste, and improves solubility for drugs that are less soluble in a high pH environment. It has applications also for local drug delivery to the stomach and proximal small intestines. Gastro retention helps to provide better availability of new products with new therapeutic possibilities and substantial benefits for patients.

Situations where gastric retention is desirable

Situations where gastric retention is not desirable

Dosage form must be able to survive the forces caused by peristaltic waves in the abdominal and persistent contractions and grinding and churning mechanisms. To function as a gastric retention device, it must resist premature gastric emptying. The device should be removed from the stomach with ease.

Various approaches have been followed to encourage gastric retention of an oral dosage form.

HBS is low-density systems that have enough buoyancy to float over the gastric fluid and persist floating in the stomach without affecting the gastric-emptying rate for an extended period of time. The drug is released gradually at the desired rate. This results in an increased GRT and an improved regulator of the fluctuations in plasma drug concentration. While, nominal gastric content required to allow the proper getting of the buoyancy retention principle, a minimal level of floating force (FF) is also required to retain the dosage form reliably buoyant on the surface of the meal. Many buoyant systems have been developed based on granules, powders, capsules, tablets, laminated films and hollow microspheres. Examples of various drugs formulated as different forms of FDDS. 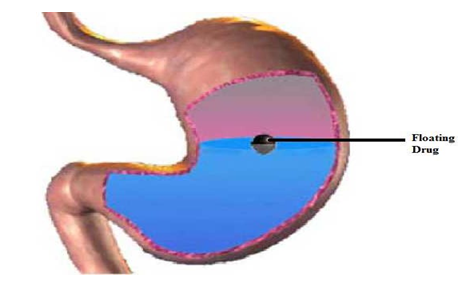 The HBS is the novel dosage form, which when in interaction with gastric fluid and after dissolution of the outer exposed superficial of the dosage unit, forms a hydrated gel layer and maintains bulk density less than 1 g/cm3. Thus, this system remains buoyant in the gastric fluid inside the stomach for more than 6 hrs. while conventional dosage forms break fully within 60 minutes and are emptied totally from the stomach just subsequently. This type of dosage form releases the drug through the hydrated layer by diffusion principle. The drugs, which are soluble at lower pH and have absorption window in the upper GIT. By varying the composition of the excipient between 22% and 72% w/w of one or more gel-forming hydrocolloids such as hydroxyethylcellulose, hydroxypropylcellulose, HPMC and sodium carboxymethylcellulose, the granules into compressed into tablets or encapsulated into capsules, which results in the desired release rate of the drug. This hydrated gel controls the rate of solvent penetration into the device and the rate of drug release from the device.

Floating drug delivery systems are classified depending on the use of two formulation variables: effervescent and non-effervescent systems.

Various attempts have been made to retain the dosage form in the GI track as a way of swelling the retention time. These attempts include introducing floating dosage forms (gas-generating systems and swelling or expanding systems), mucoadhesive systems, high-density systems, modified shape systems, gastric-emptying delaying devices and co-administration of gastric emptying delaying drugs. Among these, the floating dosage forms have been most commonly used. FDDS have a bulk density less than gastric fluids and so remain buoyant in the stomach without affecting the gastric-emptying rate for a prolonged period of time. While the system is floating on the gastric contents, the drug is released lowly at the desired rate from the system. After release of drug, the residual system is emptied from the stomach. His results in an increased GRT and a better control of his fluctuations in plasma drug concentration. However, besides a minimal gastric content needed to allow the roper achievement of the buoyancy retention principle, a minimal level of floating force (F) is also required to keep the dosage form reliably buoyant on the surface of the meal. To measure the floating force kinetics, a novel apparatus for determination of resultant weight has been reported in the literature. The apparatus operates by measuring continuously the force equivalent to F (as a function of time) that is required to maintain the submerged object. The object floats better if F is on the higher positive side. This apparatus helps in optimizing FDDS with respect to stability and durability of floating forces produced in order to prevent the drawbacks of unforeseeable intragastric buoyancy capability variations.8, 9, 10, 11, 12 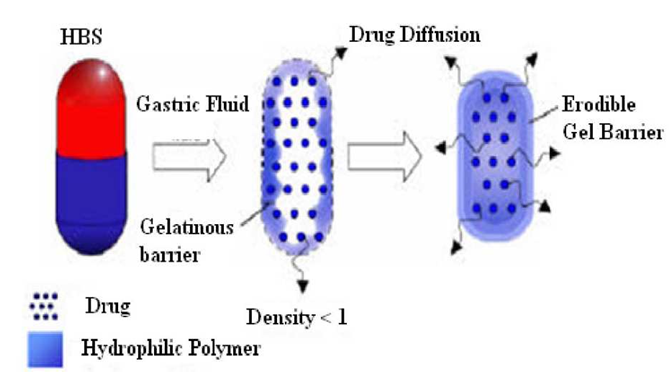 HBS have unlimited possible to expand the therapeutic efficacy of drugs with high solubility at acidic pH, narrow-absorption windows and instability at alkaline pH. A systematic indulgent of the anatomy and physiological state of the GI track, studies into the impact of formulation, process and method variables on dosage form quality is a precondition for the successful design of HBS dosage. As from the pharmaceutical part, upcoming ways of HBS dosage may essential to emphasis on a combination approach of GRDDS to attain better and efficient product quality. Besides, a scientific approach could be used to better recognize the effects of formulation and process variable on product quality and performance.

The authors report no conflicts of interest. The authors alone are responsible for the content and writing of this article.